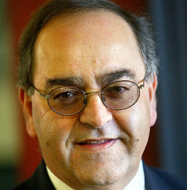 Professor Vin Massaro was educated at Morwell High School and Monash University, where he graduated with a BA and PhD.

Professor Vin Massaro was educated at Morwell High School and Monash University, where he graduated with a BA and PhD.  He has held several senior positions in educational management and policy in universities and government, and as a consultant and adviser in Australia and internationally. He has also been Chairman and a member of several company boards, and is currently a member of the Board of Northern Health, one of the Victorian Metropolitan Health Regions.

Vin is currently Managing Director of Massaro Consulting, specialising in higher education and health workforce projects. He is also a Professorial Fellow in the LH Martin Institute for Higher Education Leadership and Management at the University of Melbourne, and in the Australian Health Workforce Institute, a joint Institute of the universities of Melbourne and Queensland. He is a Senior Associate of the Eidos Institute.
He is Editor of the OECD's Journal, Higher Education Management and Policy.

Vin has been Executive Dean of the School of International Development at Melbourne University Private, Chief Executive of the Royal Australasian College of Surgeons, inaugural Chief Executive of the Victorian State Board of Education, and Director of Administration and Registrar at Flinders University. He has held senior positions at Latrobe University, the Lincoln Institute of Health Sciences and the Australian Vice-Chancellors' Committee. He has also been a consultant on higher education to the OECD and an adviser to several governments.

Vin has an Honorary Fellowship of ATEM and has held several elected positions in the organisation, including as President (1989-1992), Vice-President in 1980 and 1988 and Victorian Branch President (1998-1999).
His research interests are in higher education policy and management, with particular emphasis on quality assurance and governance, and he has published widely on these topics. He was Founding Editor of the Journal of Higher Education Policy and Management, and continues as a member of the Journal's Editorial Board.

Massaro, V.  "Higher Education in the Aftermath of the Bradley Review: A Critical Reflection", Australasian Journal of Community Engagement, Vol 3. No 1, Autumn 2009, 28-44.

"Managing Consultants – the Chief Executive and the Consultant". Invited Address to the Australian Institute of Management Consultants. Melbourne, 11 June 2003.

"Thinking and Operating in a Commercial Framework".  Address to Conference: "College and University Marketing in Support of the Academic Mission".  Sydney, 28-29 June 2004 (reported in Australian Financial Review 5 July 2004).

"Higher Education and the Outcomes of the Bradley Review: The Implications of the Government's Budget Response".  Keynote Address to the ATEM Central Region Annual Conference, Adelaide, 20 May 2009.

"A Tale of Two Countries: Higher Education and Economic Recovery in Ireland and Australia."  Address to the OECD/IMHE General Conference.  Paris, 13-15 September 2010. (With Ellen Hazelkorn.)

"Indemnity Still on the Critical List", The Australian, 2-3 November 2002.  (Opinion column on the government's proposed solution to the medical indemnity insurance problem.)

"Diversity must be rewarded", The Australian, 16 July 2003.  (Invited Opinion column on the government's proposed changes to Higher Education.)

"Answer to university funding is in the market", The Australian Financial Review, 23 February 2004.  (Invited Opinion column on university commercialisation)

"Feds in the driver's seat", The Australian Financial Review, 22 November 2004.  (Opinion column on the implications of the Federal Government assuming legislative responsibility for universities.)

"Revolution could take some time", The Australian, 9 July 2008.  (Opinion column on the Review of Australian Higher Education.)

"Failure to deliver a road map", The Australian, 17 December 2008.  (Opinion column on the Review of Australian Higher Education.)

"Unpicking the Bradley Report", The Australian, 17 February 2009.  (Opinion column on the Review of Australian Higher Education.)

"Fix the funding shortfall or universities will fall in a hole", The Australian Financial Review, 11 May 2009.  (Opinion column on higher education reform and the federal Budget.)"Outcomes of the Bradley review",World University News, Issue 77, 24 May 2009.  (Feature Article on the 2009 Budget and the Bradley Review.)